Marguerite de Angeli with her editor on the night she accepted her Newbery Award for the Door in the Wall. 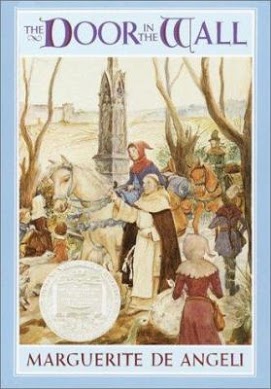 "Thou has only to follow the wall far enough and there will be a door in it." The Door in the Wall.

"As always, Mama was astonished that anyone would think her work superior enough to win the Newbery Medal. To say she was thrilled would be an understatement. Typically, she gave a great deal of credit to an old friend, Harm Robinson, who was the inspiration for THE DOOR IN THE WALL, and to her editor at Doubleday, Peggy Lesser.

Her sense of wonder and modesty about her talent were things that lent her work such charm, in both the text and the illustrations, and her love of people, especially children, is evident throughout."

"...It is still unbelievable that I should have been chosen to receive the Newbery Medal. For days after hearing the news, I would say to myself, "Perhaps it isn't really true, perhaps I won't be chosen after all." It was something like the wonder and unbelief I used to feel at Christmas."

"...I have always wanted to draw and to write. Even now, I can remember the way it felt to be walking home from school in the small Michigan town where I was born, arm in arm with a school girlfriend, only half listening to her chatter because I was dreaming of something else; wondering how I could put down in words the sheer joy in living which filled me to bursting, or how I could draw the moving shadows, the sunlight sifting through the leaves, the tree branches against the white house, or the stream of boys and girls themselves. How could I grasp that shining and elusive 'something' which was away and beyond, yet was within me, and fairly lifting me off the earth? How could I, all at once, do the many things I wanted to do? I wanted to sew grown-up clothes for my doll, I wanted to make hats, I wanted to learn what we used to call 'recitation,' and I wanted to sing. What to do first?"

Usually, such vague strivings ended in my doing nothing. but sometimes I would draw furiously for weeks. At those times, nothing resembling paper was sacred from my pencil. The curlicues in the wallpaper needed only elaboration to bring out the faces I saw there. The smooth fly leaf in a treasured book invited my pencil, or the back of a photograph looked tempting - anything that happened to be at hand."

Then quite suddenly, the urge to draw would end; a period of writing would take its place. If Louisa Alcott could write a book one could read over and over again, and yet have the story about a plain American family, perhaps I could write one, too. But it always seemed as if the pictures came first and the writing was an outgrowth of them."

"...It wasn't until I was married and the mother of three children that the impelling drive to draw became so insistent that it wouldn't be denied."

"...The idea for a book starts from such small beginnings that often it is difficult to tell just when it begins. In a way, each book has grown out of one before it. For example, in gathering material for HENNER'S LYDIA, the subject of which was suggested by Miss Lesser, I made sketches of scenes in Lancaster County, Pennsylvania. One of these was a hundred-year-old barn which burned to the ground only a few hours after I had made the sketch. The story of the fire didn't fit into HENNER'S LYDIA, but it later became the basis for YONIE WONDERNOSE."

"...We discovered as others have how little basic differences there is; that it is only in the non-essentials that we differ; what we have for breakfast, and how we greet our parents, or a different way of expressing the same homely truths, those bits of wisdom that have grown out of ages of experience. ..."

"...The story of Robin, THE DOOR IN THE WALL, is based on the childhood experience of an old friend who is now our neighbor as well. We first met through our music. He was the violinist of the quarter and in the symphonic group. His handsome white-crowned head was always the most distinguished, and when he spoke, his dry humor and interesting conversation were always the center of attention. This dear friend has been bent and lame since childhood, yet he has so beautiful a character and has lead so useful a life that he is an example to all who know him. He is a fine craftsman and cabinet maker as well as an accomplished musician. Because he and his wife began to build next door to us at the same time we were rebuilding, we saw them daily and were more than ever impressed with the way character can rise above physical handicap. I began to think of how many children learn to live with some disability and of what encouragement might be given them through a story about 'Robin'.

For some reason I wanted to lay the story in medieval England, perhaps because I like to draw the costumes and the castles. It may have been for both reasons, or because I thought that whatever a child could accomplish in that time when there was little medical help and no mechanical aids, he could do now."

It was a long time before I settled more or less exactly on the period for the story. But one by one little things kept drawing me to the time of Edward the Third. One thing which I know know influenced me what a picture given me by my husband long ago, and which I had not seem for some time because one of the children had it. It showed Edward and his Queen Philip pa and the burghers of Caliais. It wasn't till after THE DOOR IN THE WALL was published that I saw it again and realized that it had been in the back of my mind all the time."

"...There was so much material in the book that it was difficult to choose what would be most suitable and best to use. Most of it would require too much explanation and would be interesting to a child only if properly related to the story. It is very easy to be led astray by something which seems interesting to oneself, but which would not carry the story forward. In the end, there was actually very little I could use from the book, but it gave me a background of life in the Middle Ages and a feeling of the time which I had not had before..."

"It is really true, as we used to tell our children, "When you come to a stone wall, if you look far enough, you will find a door in it." One of the best doors I know is the help of Librarians. I don't know what I would do without them. Receiving the Newbery Medal has been for me a wonderful open door, which I hope will lead to more and better books."

The original painting that has graced the book jacket for fifty years belongs to Nina deAngeli Kuhn. Its colors are vibrant, its lines are sharp. Detail has been lost over the years from the plates used by Doubleday.