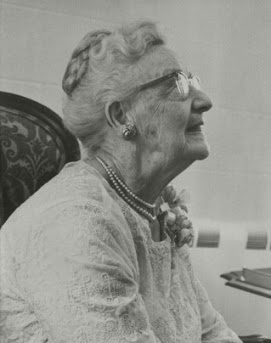 Born in Lapeer, Michigan, Marguerite Lofft de Angeli is one of the best know and highly regarded author/illustrators in American children's literature. Winner of the Newbery Medal in 1949 for The Door in the Wall, and a member of the Michigan Women's Hall of Fame, Mrs. de Angeli always remembered where she came from..... Lapeer, Michigan. Lapeer honored her by renaming the Library in her honor on Aug 22nd, 1981.

Butter at the Old Price, by Marguerite deAngeli

Highlights of a Long and Fruitful Life

March 14, 1889 - Marguerite was born in Lapeer, Michigan to Shadrach and Ruby Lofft.

1902- The Lofft family left Lapeer and moved to Pennsylvania.

1904- Marguerite entered Girl's High School and was hired to sing in the Presbyterian Church for $1 a week. Her singing teacher, Madame Suelke told her "You have a very fine voice and can go far, but I'm afraid you will be like your mother. You will marry and have 6 children. " (pg.46) She did!

1908- Marguerite met John Dailey deAngeli "He was immediately friendly and I think we knew from that moment that each belonged to the other... " (pg. 63)

1909- Marguerite auditioned for the Oscar Hammerstein Opera Company. Her parents dissuaded her.

1912 - Arthur Craig was born and the family traveled to Lapeer for Grandma and Grandpa Lofft's 50th wedding anniversary.

1913 - Ruby Catherine was born, but died tragically the next year. "We picked up the pieces and tried to think only of them (the boys) and to remember that there is no separation in love... " (pg. 81)

1916- The deAngeli's moved to Detroit where Marguerite found the time for a few art lessons.

1918- Marguerite's bout with the flu did not impede the birth of daughter Nina.

1921 - Marguerite met Maurice Bower, an illustrator, who became her mentor. "Little by little my drawings improved...I never doubted that someday I would succeed in doing illustration that would be acceptable to some publisher. " (pg 93-94)

1922 - Marguerite was hired to illustrate Presbyterian and Baptist school papers. "From that day in 1922, except for a slowing down during the Depression, there had been an almost unbroken chain of illustrations for Sunday school paper, magazines, and books. But it was 14 years and two more children before I began writing my own books." (pg. 95)

1929 - The Depression brought hard times to the deAngeli's. "Dai had no work and it seemed as if all sources of income had dried up, except occasional commissions for Sunday school papers." (pg. 107)

1935 - Using her own children as models, Marguerite wrote her first book, Ted and Nina Go to the Grocery Store.

1938 - Copper-Toed Boots, stories of her father's boyhood in Lapeer, Michigan, was published.

1950 - Marguerite was overwhelmed when Door in the Wall won the Newbery Medal. "This honor was so far beyond my wildest dream that I could hardly keep my feet on the ground." (pg, 188)

1971 - Marguerite's autobiography, Butter at the Old Price, was published. The dedication reads, "To my children. It wasn't all for them, but without them there would have been little point."

June 16, 1987 - The end of a long and rewarding life came to one of our greatest children's author/illustrator on this day.

(Quotations taken from Marguerite's Autobiography, Butter at the Old Price)